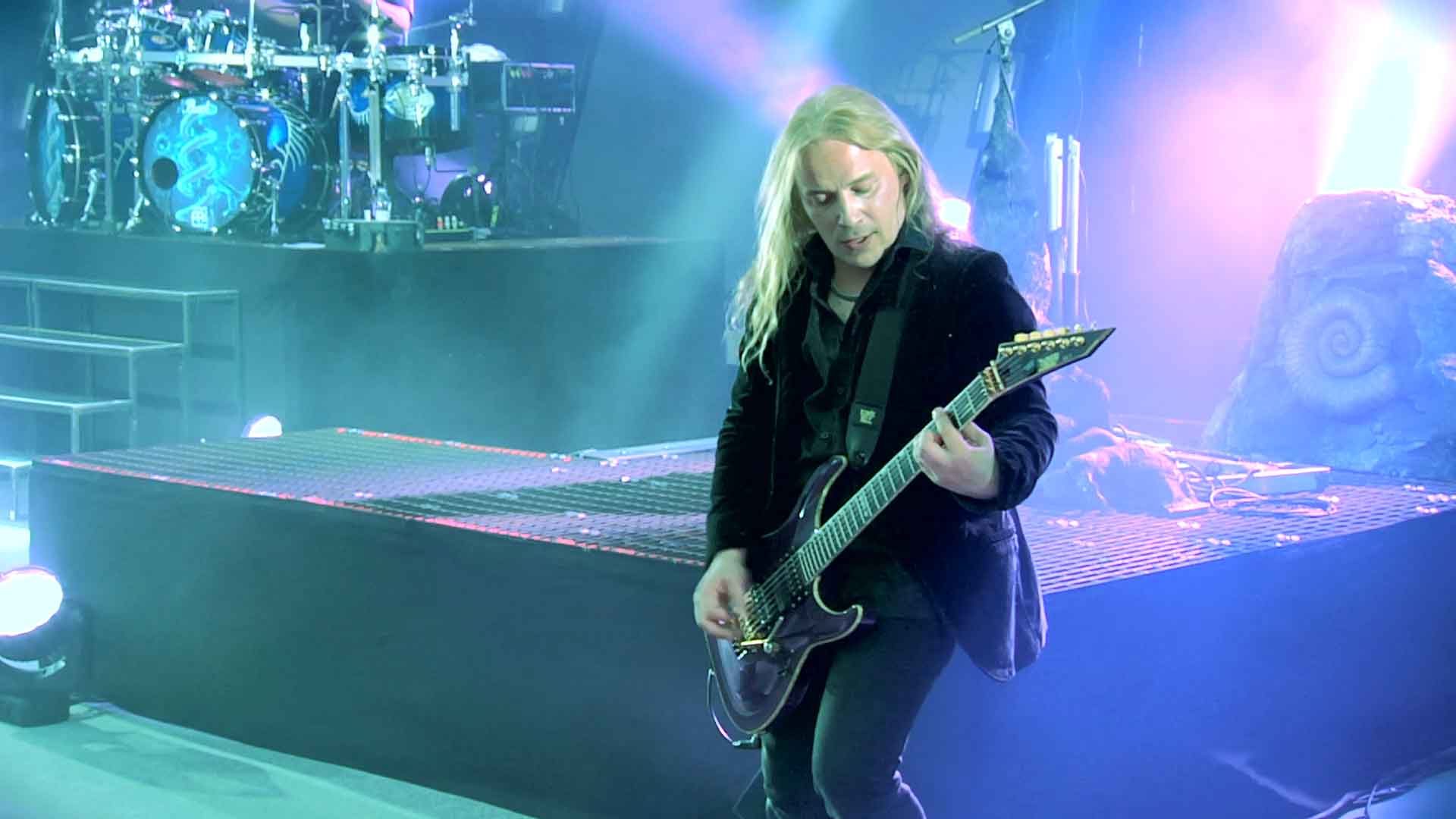 With every year that we move further away from our childhood, we lose more of the fascination for the world and forget our initial sense of beauty. The world grows duller, gets swept by everyday routine and a work-sleep-eat-repeat-rhythm – but every few decades, a bunch of musicians are able to break down these grey walls of concrete. And those who’ve seen NIGHTWISH live since their inception in 1996, know that they are the ones to shine a little light with magic, intensity and melancholy into the corners of the one’s mind that seemed long lost and forgotten.

After exactly twenty years of band history, the Suomi Symphonics around visionary and keyboardmaster Tuomas Holopainen have reached their best shape to date and this current energy is unleashed in the sextet’s new live release »Vehicle Of Spirit«. This DVD box does not only contain the two most special shows of their last world tour, but leads through the entire career of NIGHTWISH with its diverse setlists and hand-picked bonus material.

"I would say the main parts of the DVD are those two shows, both Wembley and Tampere. Wembley is mentioned first due to its recognisability and legendary status. I remember the show being very special, both a goal achieved, and a starting point”, Tuomas Holopainen explains. “The crowd was heartwarming. The presence of Richard Dawkins on stage was just mind-blowing. The overall experience felt like a once-in-a-lifetime thrill ride!

Also, it’s the history of the venue that makes it so special. All these artists and bands throughout the decades that played there! Many of which are my or the other band members` heroes in music. And you get to perform there, on the same stage, saying "Good Evening Wembley!" out loud. It was beautiful and poetic. I would think a kid, who for his entire life desires to become an astronaut and finally reaches the surface of the moon, might experience something similar.”

At the end of the show, the world famous biologist and scientist Richard Dawkins appeared live on stage with NIGHTWISH to perform his recitation at the end of the evolution hymn 'The Greatest Show On Earth' – an unforgettable moment for the band that had their latest chartbreaking album »Endless Forms Most Beautiful« heavily influenced by the works and the revolutionary views of the British scientist. But their sold-out Wembley show in front of 12.000 fans was not the only milestone on this almost 2-year-long tour and in Tampere, Finland, the band entered yet undiscovered grounds: “The show in Ratina Stadion, Tampere, was a home crowd specialty (for 4/6th of the band) with the biggest stage production we've ever had. A lovely atmosphere throughout the concert, with many same faces in the front row as there were 15 years ago. Heartfelt."

After eight genre-defining studio releases, NIGHTWISH are among the most successful metal bands of our time and the multinational act surely doesn’t have to prove anything to anyone anymore. However, they did. It was the first tour with Floor Jansen on vocals and Troy Donockley on the pipes as permanent members of the line-up and together with WINTERSUN’s Kai Hahto on drums, filling in for founding member Jukka Nevalainen after his sudden illness. But the Finnish-Dutch-British-combo already seems like a well-established team, united for decades. The line-up disagreements lay buried in the past and the dark moments are dusty and forgotten, so let’s celebrate the present day and the beauty of reality – but not without little tricks in their sleeve: Intense pyro technics, raging wind effects and hypnotic video screens transform NIGHTWISH’s shows into an incomparable force of Nature. But even though their production is at the biggest level of the band’s history, they never blindly rely on massive show effects or neglect the initial spirit of a live performance – eventually they still turn out to be the enthusiastic and fragile music lovers from Kitee. Looking at Tuomas Holopainen behind his keyboard arsenal, you still see the shy boy with his beloved biology book shimmering through. Therefore the choice of the DVD’s title doesn’t come as big surprise: "The title »Vehicle Of Spirit« came from a friend of Troy's, who after seeing our show a few years ago defined NIGHTWISH as 'A vehicle of spirit that defies category'. That beautiful description has followed us ever since, and felt like a perfect match as the DVD title,"

On both shows, the band delivers a setlist that will leave their loyal fans breathless – in London, they fly from the epic 'Ghost Love Score' to 'The Poet And The Pendulum' and the reborn version of 'Stargazers', while Tampere cheers over Floor’s unique performance of 'Sleeping Sun' and reaches its bombastic ending with 'The Greatest Show On Earth' . After three hours of colourful live wizardry, the spectator’s life will surely be and stay a little brighter.

When it comes to the fine artwork of the DVD, NIGHTWISH decided to walk different paths this time and come up with a little alternative idea, as Tuomas explains: "We didn`t want to include a traditional band shot for the cover, as on the previous DVD release »Showtime, Storytime«. So we started brainstorming on different options and the idea of a classic silent movie era Hollywood visuals quickly came up. With those classic slogans the cover has a little tongue-in-cheek-touch to it, but it's still classy and eye catching in its simplicity and originality."

The bonus material consists of several additional live clips from different shows and a short interview with the biologist Richard Dawkins, and in the end, »Vehicle Of Spirit« raises a monument for the band years 2015 and 2016. A monument for symphonic metal, for the sake of science and evolution - and the boy with the biology book.