Beth Hart will release the stunning ‘Beth Hart – Live At the Royal Albert Hall’ on Blu-Ray/DVD/2CD/3LP/Digital on 30th November 2018 via Provogue/Mascot Label Group.

Beth Hart makes one hell of an entrance. It’s May 4th, 2018, and the Royal Albert Hall is in blackout. As a sell-out crowd holds its breath in the darkness, a lone figure appears from the shadows and purrs the opening line of As Long As I Have A Song in that unmistakable burnt-honey voice. Taking her time, followed by the spotlight, the Grammy-nominated singer-songwriter picks her way between the aisles of this iconic London venue, delivering the languid jazz vocal entirely acapella, while shaking the outstretched hands of fans who can’t quite believe what they’re witnessing.

It takes a special talent to command that historic stage. But for the next two hours and 23 songs, Live At Royal Albert Hall will hold you spellbound, as the singer whispers and hollers her hopes, fears and deepest secrets in your ear, making this massive venue feel like a nose-to-nose club show. A thousand interviewers have tried to unpick the fascinating enigma that is Beth Hart. But as Live At Royal Albert Hall reminds us, everything you need to know is right there in her songs – and the intimate off-the-cuff stories she spins before each one.

Stroll through downtown Los Angeles in the early-’90s and you’d have found Hart strumming guitar on 3rd Street Promenade, waiting for the big break that came when she was discovered by her manager, David Wolf, and eased into a record deal with Atlantic that gave us 1996’s Immortal and 1999’s Screamin’ For My Supper. It was a bitter-sweet period for Hart, whose unmedicated bipolar disorder and troubled personal life stopped her reaching the heights her music deserved. But to the delight of long-standing fans, she doesn’t flinch from revisiting it at the Royal Albert Hall, switching to acoustic bass and introducing the rootsy Spiders In My Bed that was written in the eye of the storm. “Back then,” she explains, “I could never sleep. I could go three or four days and stay awake, and it was just mania.”

The new millennium brought fresh hope and the musical highs returned with revered albums like 2003’s Leave The Light On and 2007’s 37 Days, Hart treats us to three of her most positive songs from that redemptive era, bolstered by the crack-squad rhythm section of Bob Marinelli (bass) and Bill Ransom (drums). For My Friend, was a highlight of 2011’s Don’t Explain: Hart’s first double-header release with Bonamassa and an album that alerted a wider audience to her jaw-dropping talents (while forging her reputation as a go-to muse for A-list guitarists including Slash and Jeff Beck).

She takes to the piano to pound through the title track of 2012’s Bang Bang Boom Boom, also cherrypicking that album for the poignant, jazz-inflected Baddest Blues. Better Than Home is represented by Trouble and Mama This One’s For You. 2016’s Fire On The Floor is mined for moments like the dramatic storm clouds of Love Is A Lie, Baby Shot Me Down and Picture In A Frame. It all ends with the astonishing slow-burn blues of Caught Out In The Rain, Hart sunk to her knees, lost in the moment as her vocal builds from a breathy vocal to a bereft roar of “God, don’t take my man”.

Not even Hart herself can follow that. And so, Live At Royal Albert Hall ends as it began, with an impassioned moment of intimacy from an artist who is setting the pace on the modern scene. It’s been a night of a thousand emotions, for both performer and audience. But as the entire crew take a low bow and Hart is carried off in the loving arms of her husband, her parting shot says it all: “We had a ball, man… 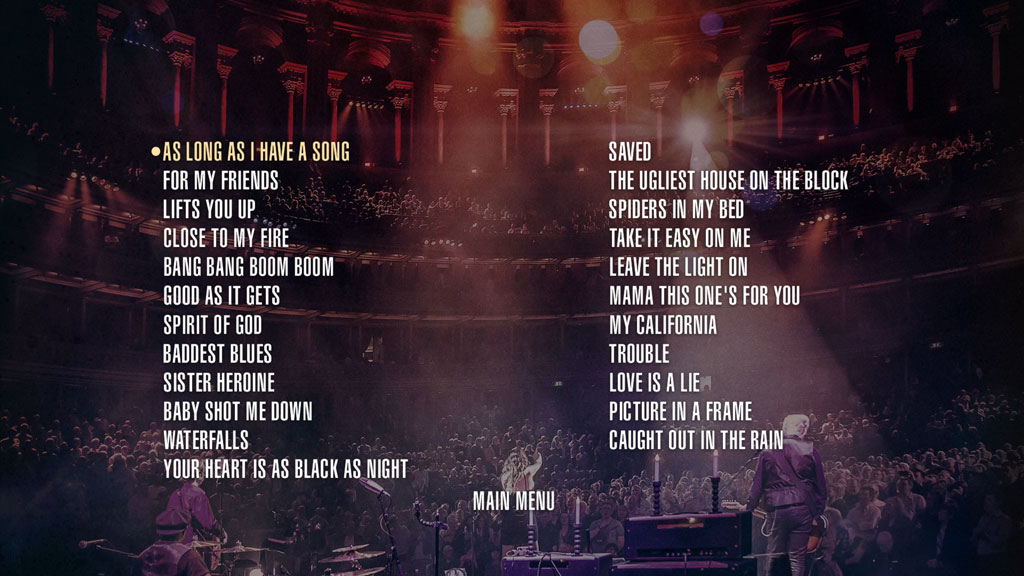