The new studio album from Steven Wilson – Blu-ray edition with 5.1 mixes (96/24 5.1 LPCM & DTS-HD Master Audio 5.1) and bonus track. Highly respected British artist Steven Wilson has revealed that his third solo album will be titled ‘The Raven That Refused To Sing (And Other Stories)’. Set for release by Kscope on February 25, 2013, the much anticipated new album was written between January and July and recorded in Los Angeles in September. Steven’s current band is a collection of stellar musicians: lead guitarist Guthrie Govan, bassist Nick Beggs, Marco Minnemann on the drums, Theo Travis playing saxophone/flute, and Adam Holzman on keyboards. The record has been engineered by legendary producer/engineer Alan Parsons and consists of 6 songs, 3 of which are 10 minute plus epics and are based on stories of the supernatural. The Blu-ray edition offers audiophiles the chance to experience the album in its full glory with 96/24 Stereo LPCM of the album, plus 2 x 5.1 mixes of album (96/24 5.1 LPCM & DTS-HD Master Audio 5.1). The Blu-ray also features instrumental versions of the album tracks (96/24 Stereo LPCM), plus bonus track (‘Drive Home’ – lounge version, also 96/24 Stereo LPCM), an art gallery Art Gallery (images by Hajo Mueller), Photo Gallery (photographs by Lass Hoile) and a studio Documentary (filmed and edited by Lasse Hoile). For those who do not know Steven Wilson he is 4-times Grammy-nominated artist and the founder and frontman of Porcupine Tree. Porcupine Tree have sold in excess of 1 million records worldwide and the band’s last tour concluded in sold out shows at Radio City Music Hall in New York and the Royal Albert Hall in London. Wilson’s Previous solo album, “Grace For Drowning”, charted around the world (UK No. 34, Germany No. 22, Netherlands No. 22 Dutch, US Billboard Rock album chart No. 19, Poland No. 7). In recent years Steven has emerged as a highly sought after re-mixer, working on 5.1 / surround mixes of classic albums by King Crimson, Jethro Tull, ELP and more. His production credits include work with Opeth, Anathema, Marillion, Anja Garbarek, Fish and Yoko Ono and he sang and co-wrote track on Pendulum’s #1 album, Immersion. He was also the winner of the ‘Guiding Light’ award at the 2012 Prog Magazine awards.

• 96/24 Stereo LPCM of the album, plus 5.1 mixes of album in 96/24 5.1 LPCM & DTS-HD Master Audio 5.1
1. Luminol (12.10)
2. Drive Home (7.37)
3. The Holy Drinker (10.13)
4. The Pin Drop (5.03)
5. The Watchmaker (11.43)
6. The Raven That Refused To Sing (7.57)
• Iinstrumentals:
Instrumental versions of the album tracks (96/24 Stereo LPCM)
1. Luminol (instrumental)
2. Drive Home (instrumental)
3. The Holy Drinker (instrumental)
4. The Pin Drop (instrumental)
5. The Watchmaker (instrumental)
6. The Raven That Refused to Sing (instrumental)
• Bonus Audio Track: (Blu-ray only)
Drive Home – lounge version, also 96/24 Stereo LPCM
Bonus:
• Art Gallery: Illustrations by Hajo Mueller (1080p)
• Photographs by Lasse Hoile (1080p)
• Studio Documentary Filmed and Edited by Lasse Hoile (1080p; 22:49) is an interesting look at some of the recording sessions. This is kind of “fly on the wall” stuff rather than overly organized content, but it’s worth a look, especially if you’re interested in seeing how these longer form tunes were constructed. This is obviously an informal look at the band, warts and all, so there is a fair degree of profanity being tossed about, for those who might be concerned about such things. 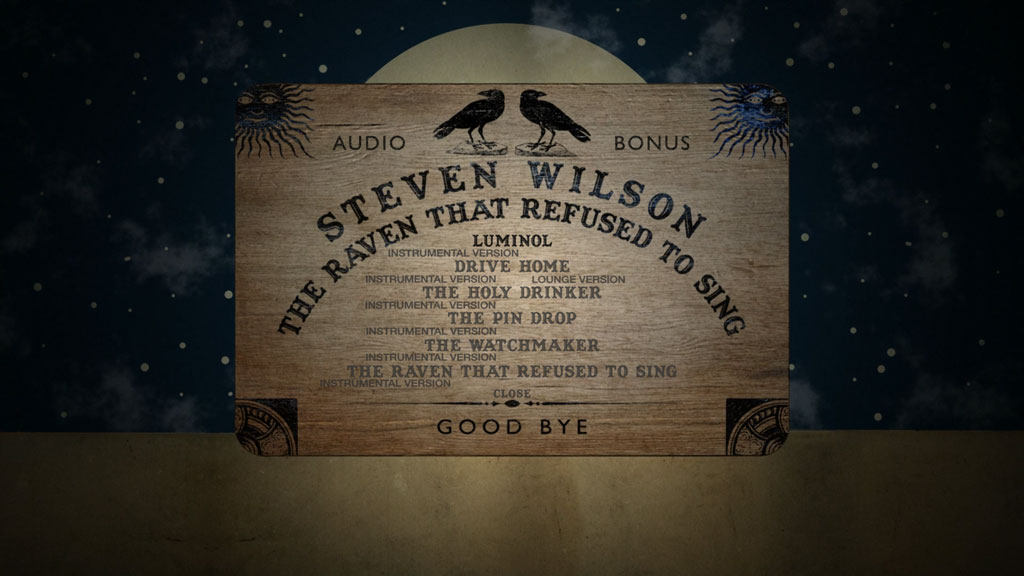 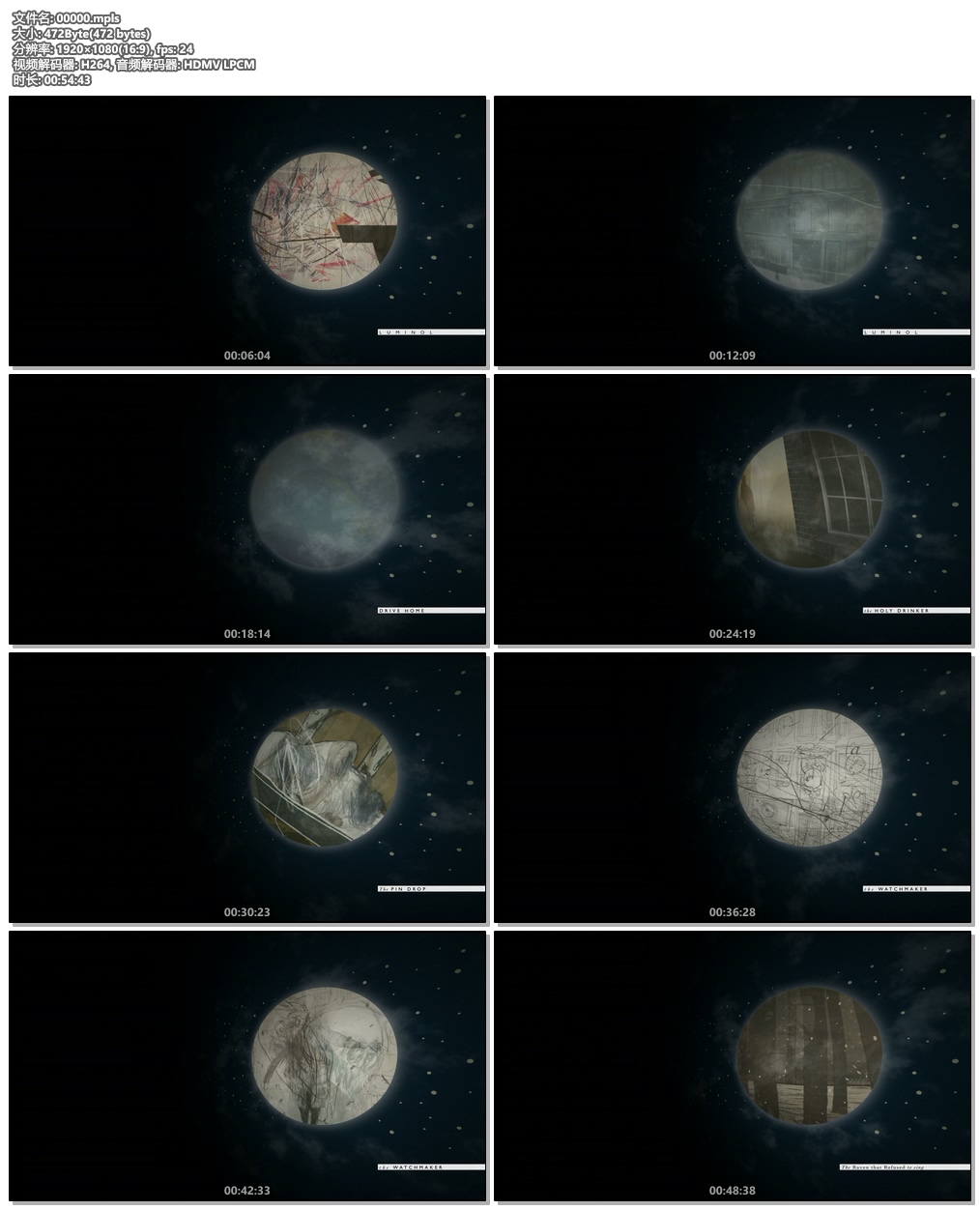